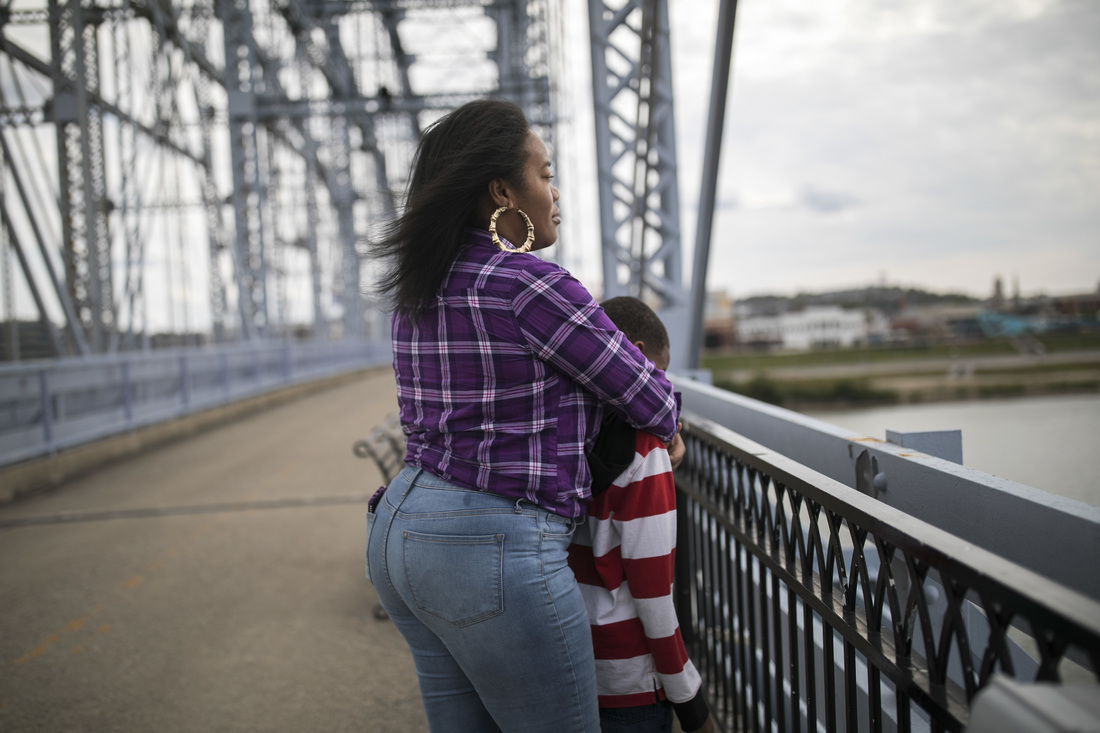 Freda and her 9-year-old son visit the Purple People Bridge in Cincinnati. She and her five children have been living in the front room of a friend’s apartment, sleeping on pads of bunched-up comforters. 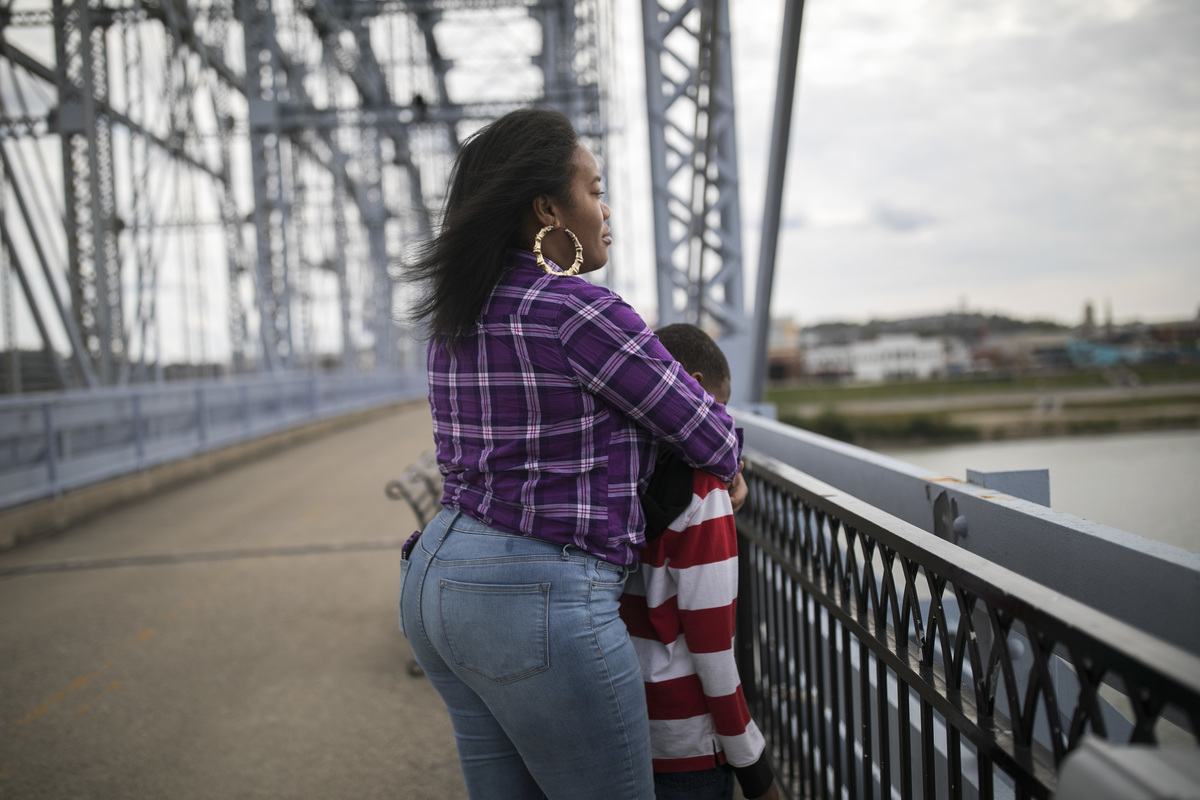 Freda and her 9-year-old son visit the Purple People Bridge in Cincinnati. She and her five children have been living in the front room of a friend’s apartment, sleeping on pads of bunched-up comforters.

The closure of school buildings in response to the coronavirus has been disruptive and inconvenient for many families, but for those living in homeless shelters or hotel rooms — including roughly 1.5 million school-aged children — the shuttering of classrooms and cafeterias has been disastrous.

For Rachel, a 17-year-old sharing a hotel room in Cincinnati with her mother, the disaster has been academic. Her school gave her a laptop, but “hotel Wi-Fi is the worst,” she says. “Every three seconds [my teacher is] like, ‘Rachel, you’re glitching. Rachel, you’re not moving.'”

For Vanessa Shefer, the disaster has made her feel “defeated.” Since May, when the family home burned, she and her four children have stayed in a hotel, a campground and recently left rural New Hampshire to stay with extended family in St. Johnsbury, Vt. Her kids ask, “When are we going to have a home?” But Shefer says she can’t afford a “home” without a good-paying job, and she can’t get a job while her kids need help with school.

For this story, NPR spoke with students, parents, caregivers, shelter managers and school leaders across the country about what it means, in this moment, to be homeless and schoolless. 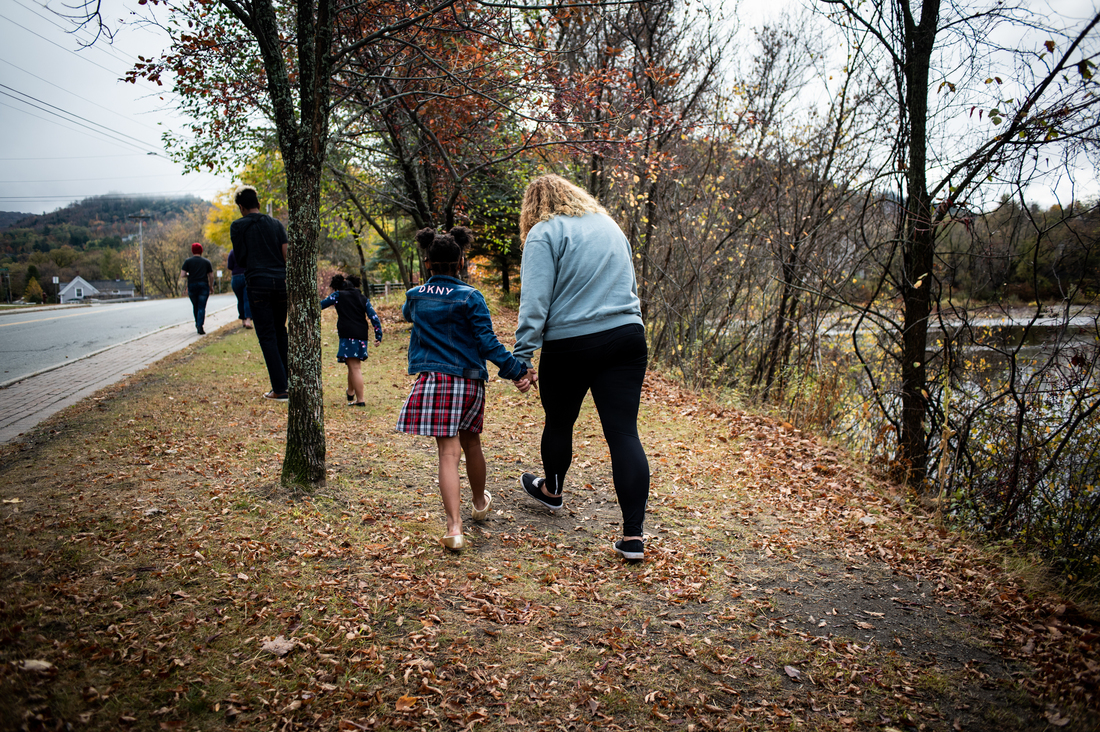 Vanessa Shefer (right) walks with her family along the Passumpsic River in St. Johnsbury, Vt. 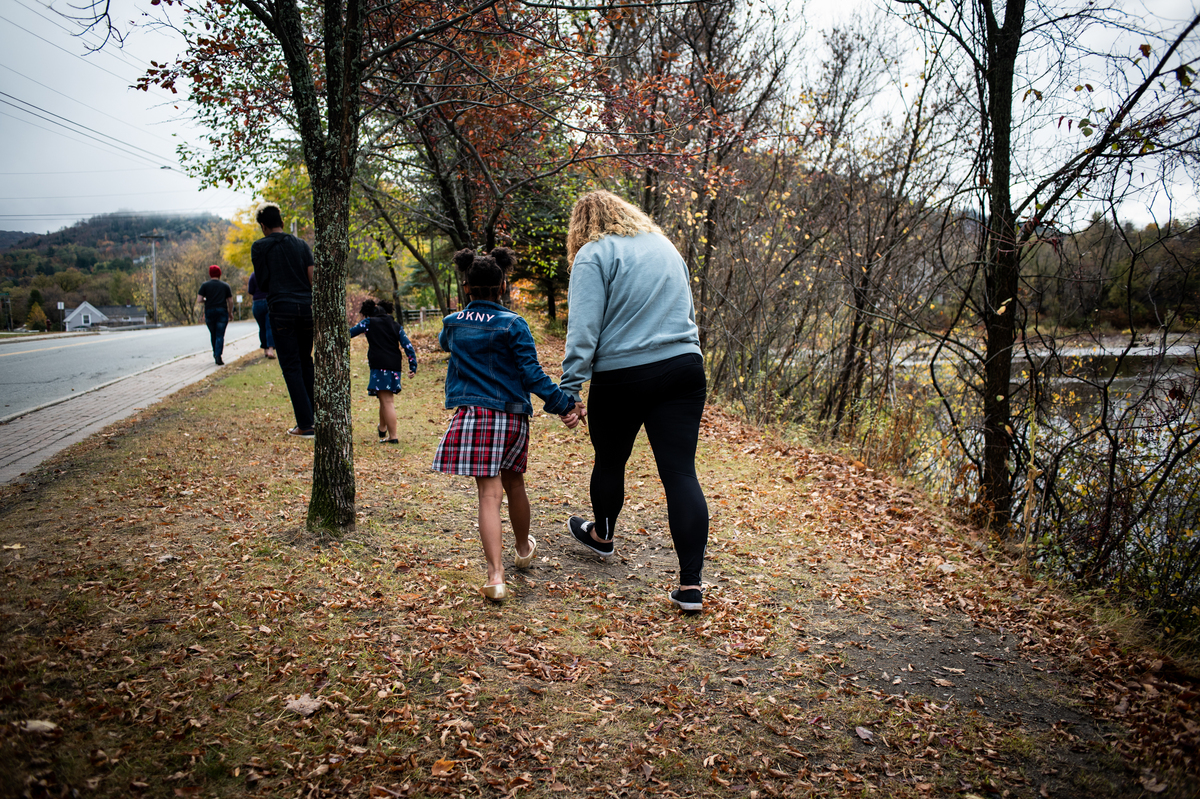 Vanessa Shefer (right) walks with her family along the Passumpsic River in St. Johnsbury, Vt.

“How do you choose between working and … your child’s education?”

Remote learning can be difficult for children without an adult at home to supervise everything from logging on to the learning itself. The past six months have put all parents and caregivers in a bind, but many families who are homeless now find themselves in an impossible situation.

“How do you choose between working and providing for your family, and your child’s education? I mean, what is your priority?” says Patricia Rivera, a former Chicago Public Schools social worker and founder of Chicago HOPES For Kids, an afterschool program for homeless youth.

Rivera points out that many homeless shelters don’t allow parents to leave their children while they go to work. In the past, kids have simply gone to school or parents have found low-cost childcare. But, because of the pandemic, those options have disappeared for many families.

In May, Vanessa Shefer felt torn between her job at Dollar Tree and helping her kids with remote learning. “It was just getting crazy,” she remembers. She would work from 6 a.m. to 2 p.m. “When the kids were having to log on, I just had to trust that that’s what was happening there.” 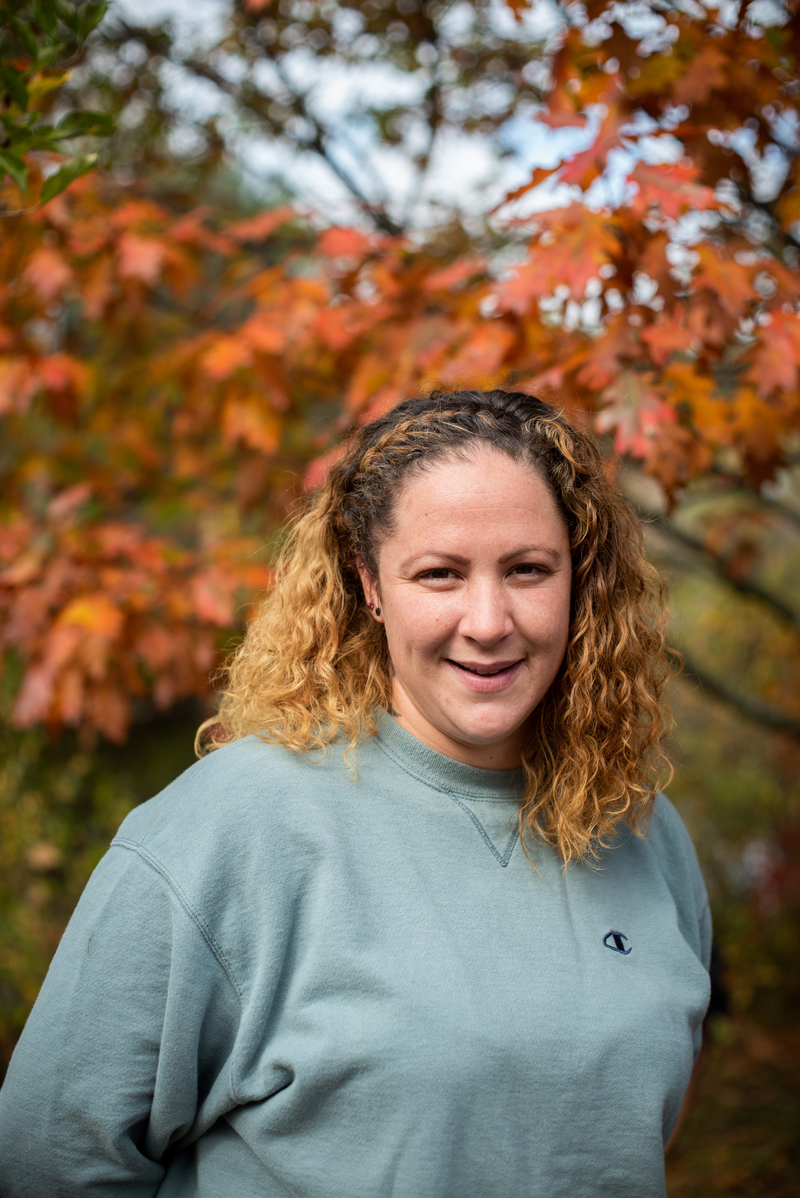 Shefer says she can’t afford a home for her kids without a good-paying job — and she can’t get a job while her kids need help with school.

The kids’ father dropped in to help, Shefer says, but their two eldest sons struggled. Both have specialized education plans, and both had trouble navigating school online.

“It’s hard for them to grasp what to do,” Shefer says. “And they get frustrated and give up before they even try… My children were required to have four Zoom meetings a day with different teachers, and all of them assigned work. So it was too much.”

Shefer ultimately chose to quit her job to be with her children full-time.

April, a mother in Chatham, N.J., also felt torn about leaving her children, in her case to look for work. She and her four kids were placed in a cramped hotel room earlier this year, after they lost their home. She described her experience to federal lawmakers in a July online briefing, in which she was identified only by her first name. She recalled riding the train, looking for work in the midst of the pandemic, and her kids calling, “complaining, ‘We can’t log on. The Internet’s not working.'”

The hotel was about 45 minutes away from their school, April said. “My kids had nowhere to go, nowhere to be, no outlet. I found a job, and they were angry at me because I’m leaving and they can’t.” 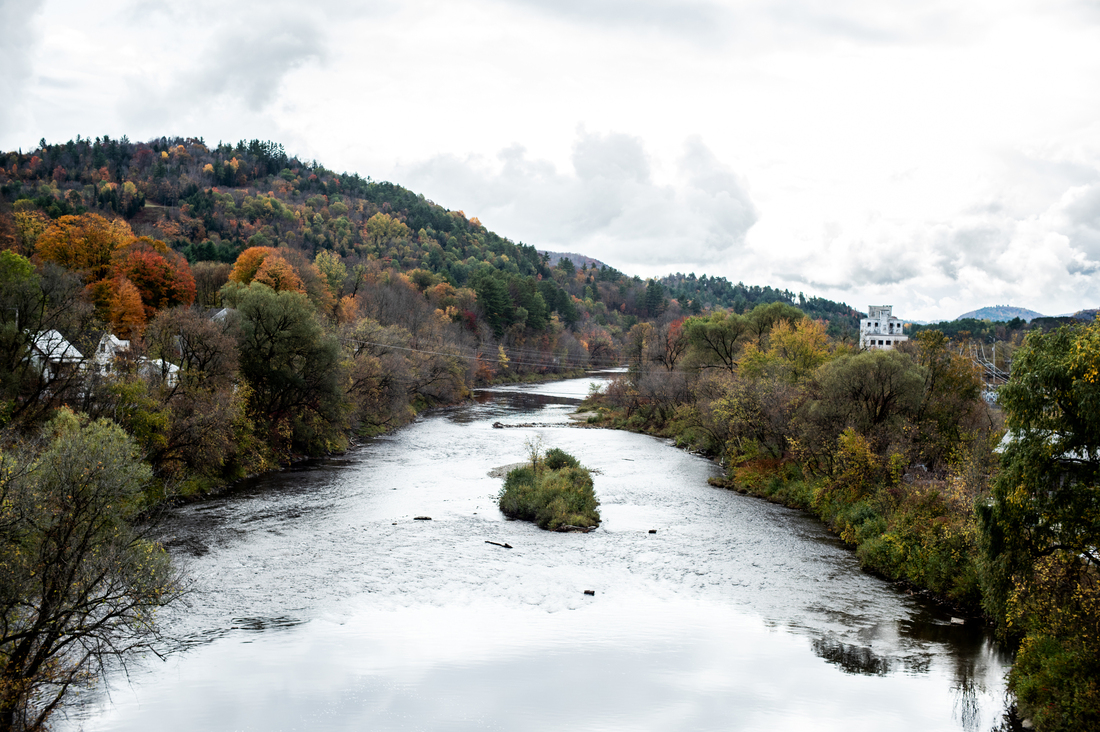 Shefer and her family moved to St. Johnsbury from rural New Hampshire to stay with extended family. 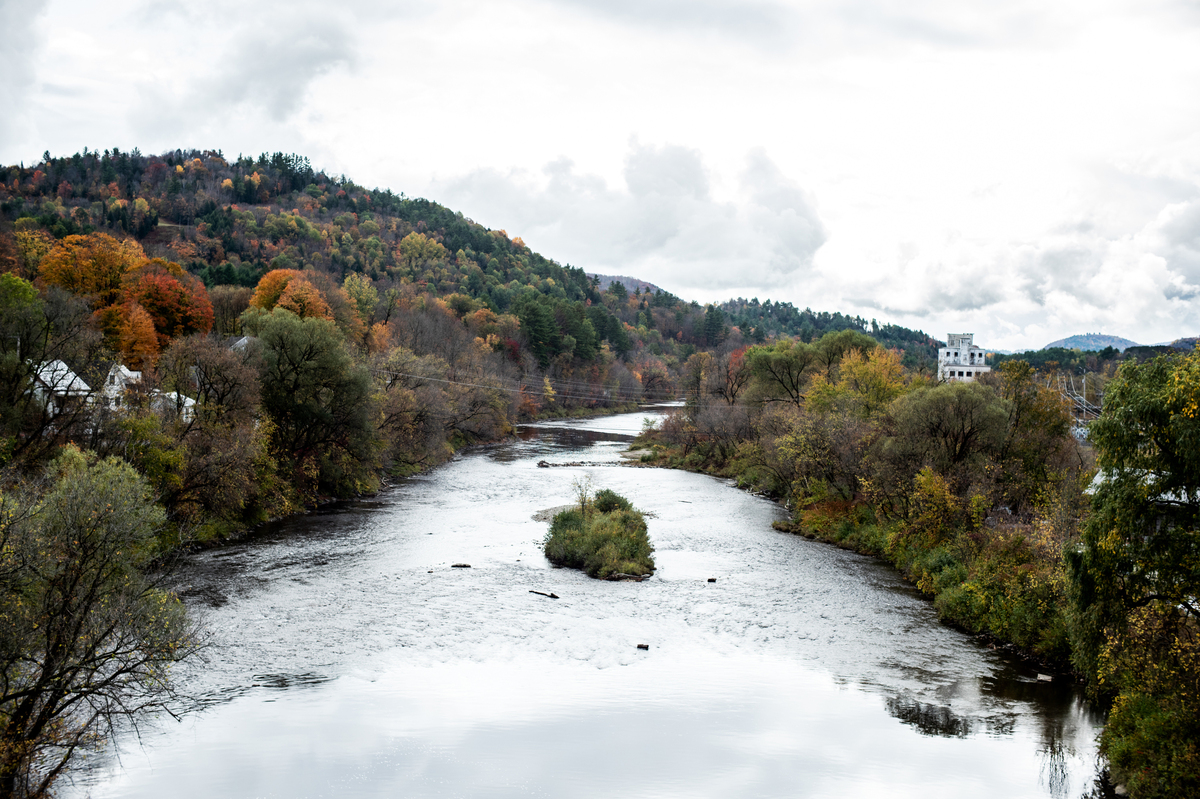 Shefer and her family moved to St. Johnsbury from rural New Hampshire to stay with extended family.

A struggle to get online

Even if they don’t need adult supervision, every student trying to learn remotely must have access to a computer and the Internet. While many districts have provided the former, several families experiencing homelessness tell NPR they still struggle to get online.

Freda, in Cincinnati, says her five children have tablets, thanks to their district, and free Wi-Fi, thanks to a partnership between the schools and the service provider, Cincinnati Bell. But the download speed is too slow for all of them to use at once, Freda says. “It sucks. Bad.” (We aren’t using Freda’s last name because she and her children say they fear the societal stigma that’s sometimes associated with homelessness.)

April told lawmakers the poor Wi-Fi at her hotel discouraged her kids from participating in online learning.

“It was just impossible. They just didn’t want to do the work at all because they felt so hopeless. I had nothing to take away from them if they didn’t do their work. What was I going to take away? Nothing.”

Rebekah Lopez, a mother in Flagstaff, Ariz., is especially worried about her 7-year-old daughter falling behind. They’ve been living in a camper, without steady Internet. When schools moved online in the spring, learning essentially stopped for Lopez’s family.

“I feel like [my children] have kind of regressed since all this has happened because they haven’t been in school like they should be,” Lopez says.

Even in districts that are handing out Internet hotspots, families experiencing homelessness may not know about the giveaways because they’ve moved, often farther from a school, as they search for stable housing, and may not have reliable access to email or a phone.

The consistency of school

For children experiencing homelessness, the greatest challenge of remote learning may not be logistical at all — but emotional.

Freda and her children — ages 17, 13, 11, 9 and 7 — share the front room of a friend’s apartment, sleeping on the floor on pads of bunched-up comforters. A few weeks ago, she and her youngest were watching a cartoon, about a group of friends playing, when her son said, “I miss school. When are we going back?”

Life in a shelter, hotel or a distant relative’s home can be isolating for a child if they’re not living near friends. Freda says the place they’re living now is far from school, and her kids have not been able to play with friends. Many families don’t have transportation either, and, with public transit still disrupted, the social isolation will continue until in-person school resumes.

“[School] gives them that stability,” says Julie White, who lost her home to Hurricane Harvey in 2017, and is living in a shelter in Bastrop, Texas, with her 18-year-old daughter and 11-year-old granddaughter. A few weeks ago, her granddaughter told her, “‘I really want to go back to school. I just don’t like being away from people.'”

Making matters worse, many children living through homelessness had already experienced stress and trauma before the pandemic — from changing addresses, food insecurity and physical or emotional abuse. That makes the consistency of friends and the kind of adult support a school can provide that much more important — and its absence, that much more destabilizing.

“There is nothing equitable about distance learning”

None of this is news to school leaders, who say it is these children — their most vulnerable students — who keep them up at night with worry.

In Eatonville, Wash., which sits in the shadow of Mount Rainier, school superintendent Krestin Bahr remembers two children in particular. Last spring, with schools closed, they had come to pick up their free meals, then lingered outside the elementary school so they could use the Wi-Fi to work.

“It was freezing cold,” Bahr remembers. “They were huddled right in the doorway up against the closed doors… We knew that the family was living in their car, but they didn’t have any connectivity. It just tore my heart. I thought, ‘You know what? That just cannot happen in America.’ “

In her remote town, Bahr says school is the only social safety net for homeless youth. After seeing those two students, huddled in the cold, she told herself: “We are never closing our doors again… It’s our moral obligation.”

This fall, as Bahr has slowly reopened Eatonville’s schools, she quickly welcomed her most vulnerable students back into the buildings so they could at least log onto district Wi-Fi and stream their lessons from the safety of the cafeteria. 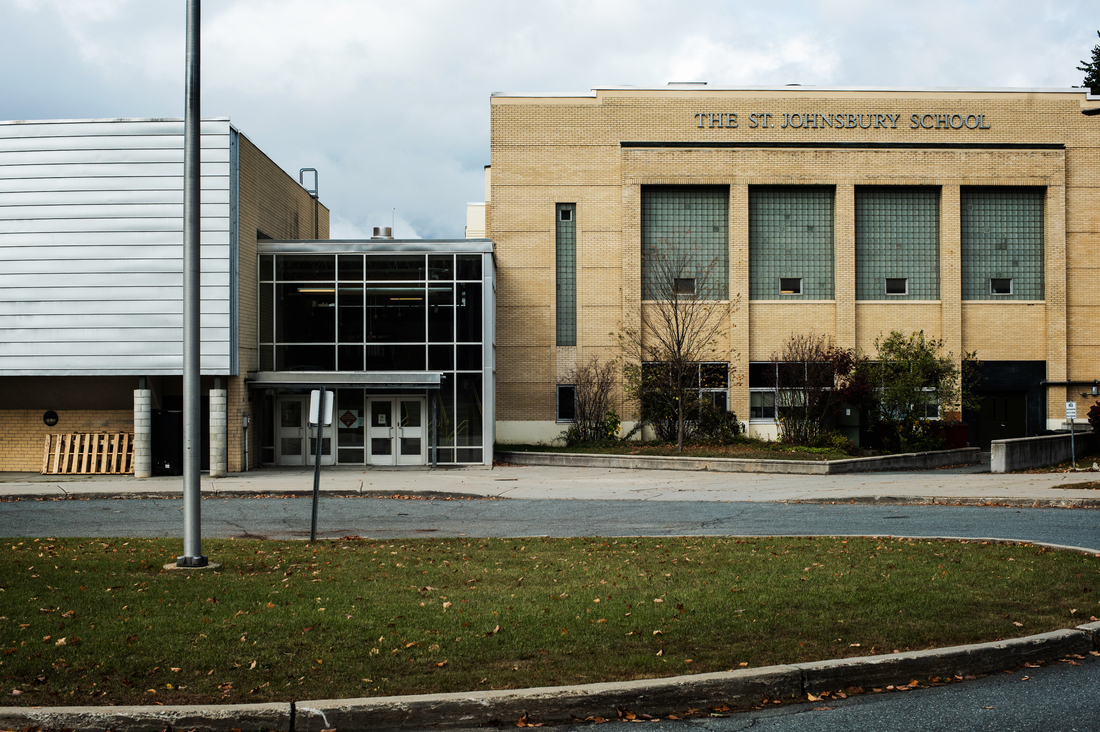 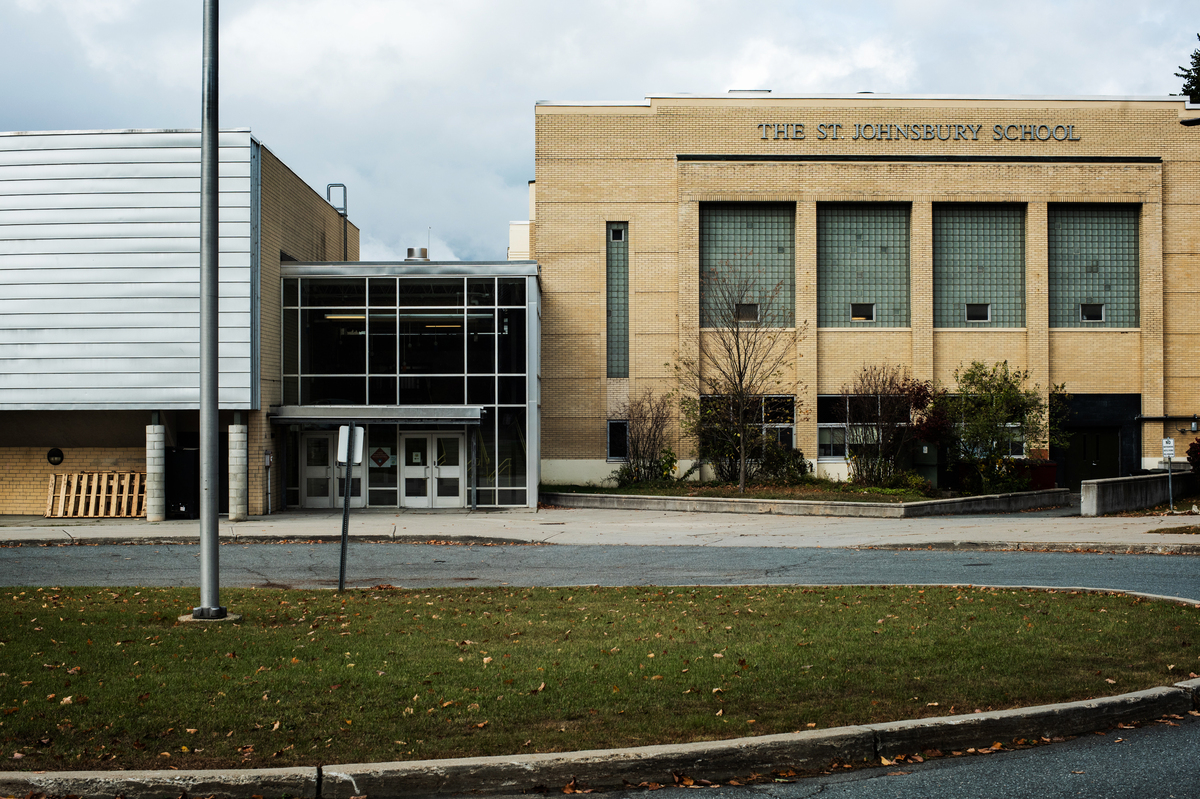 Several school leaders say the toll of closing schools haunted them this summer, as they debated how and when to reopen. They understood that, for their most at-risk kids, especially students who are homeless, closing schools put them at even greater risk — of falling behind academically, not eating three healthy meals a day and experiencing abuse or trauma.

“There is nothing equitable about distance learning for children and youth who are homeless,” says Barbara Duffield, the head of SchoolHouse Connection, a national nonprofit that advocates for homeless youth. “The cost of keeping everyone safe is costing some children much more.”

Even in a pandemic, Duffield says, schools must do more to serve students experiencing homelessness. It’s not only the right thing to do, she says, it’s required by the McKinney-Vento Act, a federal law that guarantees homeless children the ability to go to school, no matter where they’re staying, what paperwork they have or whether they have a parent with them.

“Even though schools are closed right now, it’s still a lifeline,” Duffield says of the law. “It’s been consistent, and it’s not implemented everywhere well or at all.”

That’s another reason many districts that remain closed for the majority of kids are slowly re-opening for students who are homeless.

Vanessa Shefer’s new district, in Vermont, is now open part-time. Her kids recently began attending in-person two to three days a week. With that time, Shefer hopes to re-focus on finding work and completing her certification to become an EMT, her dream job.

Julie White’s granddaughter also just began in-person classes at a new school, full-time. At first, White says, the 11-year-old was scared — of having to make friends and of contracting COVID-19. “But not anymore,” her granddaughter says. “I love the new friends I just made, and I even ran into some old ones.”

In Flagstaff, Rebekah Lopez and her husband now send their two children and niece to a district-run learning center, where they can at least access Wi-Fi while they continue remote learning. It’s an improvement, Lopez says, but she’s still worried about the ground they lost.

“They’re not getting the education that they need.”

And in Cincinnati, where Freda has struggled to work and help her kids with remote learning, plans to reopen schools were recently scuttled because of rising infection rates.

“My children are devastated,” she says. “I’m devastated.”