Skip to Content
Home health Where Will Moderna Be in 10 Years?

Ten years ago, Moderna (NASDAQ:MRNA) was a brand-new biotech still more than five years from advancing its first candidate into clinical testing. It was also eight years away from conducting the biggest initial public offering in biotech history.

Much has changed over the last decade. Moderna now claims a market cap of close to $30 billion. It’s a pioneer in using messenger RNA (mRNA) to treat and prevent diseases. Moderna’s mRNA-1273 ranks among the leaders in the coronavirus vaccine race.

Where will Moderna be 10 years from now? There’s no way to know for sure, but here’s one realistic possibility. 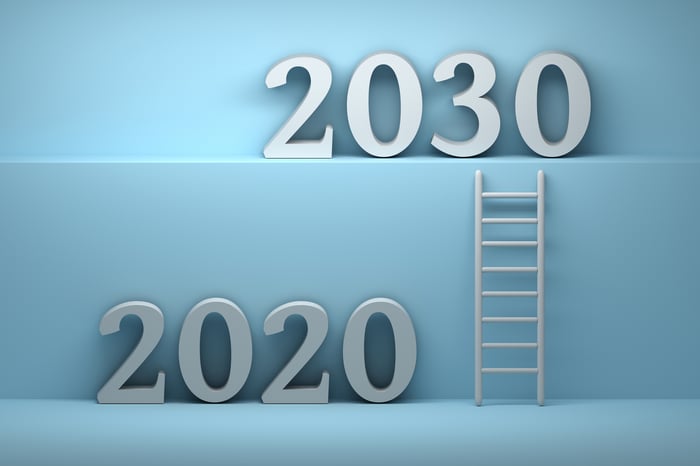 Any discussion of Moderna’s future has to begin with what could very well become the biotech’s flagship product: COVID-19 vaccine candidate mRNA-1273. Moderna hopes to file for emergency use authorization from the Food and Drug Administration for mRNA-1273 in late November.

That filing will, of course, hinge on successful late-stage testing of mRNA-1273. My prediction is that everything will go well, leading to the vaccine winning EUA before going on to secure full FDA approval.

Assuming that happens, it’s a foregone conclusion that mRNA-1273 will become a blockbuster success for Moderna. What’s less certain is exactly how much money the vaccine will make for the company. That will depend in large part on the safety and effectiveness of other coronavirus vaccine candidates.

mRNA-1273 or a potential successor could still contribute significantly to Moderna’s top line 10 years from now. I suspect that COVID-19 will follow a similar path as the seasonal flu, with people receiving vaccines at least annually. If so, Moderna’s flagship product could continue to rake in big bucks through 2030 and into the following decade.

While mRNA-1273 is the biggest story for Moderna now, my view is that the biotech could have multiple products on the market within the next 10 years. Moderna has long believed that if mRNA is successful in treating one disease, it should be able to address lots of diseases.

The company’s pipeline includes four programs in phase 2 testing that could potentially be available for sale by the end of this decade, including its cytomegalovirus (CMV) vaccine. CMV is especially problematic for babies. Close to one in 200 babies is born with CMV infection, with roughly 20% of those babies experiencing long-term health problems.

mRNA could have even more applications. AstraZeneca is evaluating AZD8601, an experimental mRNA therapeutic initially developed by Moderna, in a phase 2 study for treating coronary artery disease.

There’s also a chance that some of Moderna’s programs currently in early stage testing could be on the market by 2030. If mRNA-1273 is effective against the novel coronavirus, I fully expect that Moderna could eventually become a top player in vaccines for other viral diseases, including the flu and respiratory syncytial virus.

How big can Moderna grow? I think it’s possible that the biotech stock could sport a much bigger market cap by 2030 if all goes well. However, there are several factors that will determine just how successful Moderna will be.

Arguably the most important of these is the safety of Moderna’s mRNA approach. It’s possible that mRNA-1273 could win approval, yet still have enough safety issues that make the company’s mRNA technology less attractive than hoped.

Other companies are also developing mRNA vaccine and therapeutic candidates. Moderna won’t necessarily have a corner on the market even if its programs are successful in clinical testing.

There’s another possibility that could keep Moderna from growing into a monster stock that investors would love: a potential acquisition. I don’t think it’s out of the question that Moderna won’t even exist 10 years from now as a stand-alone entity.

We’ll have to wait until 2030 to know if my predictions are anywhere close to being accurate. But we’ll know a lot sooner if mRNA-1273 is going to work. Good news now could go a long way toward painting a better picture of how Moderna will fare in the future.