Kemp said he’s exploring other options to “keep the process moving” but wouldn’t say if that would involve an executive order.

“We’re talking about what else we can be doing,” he said. “But I haven’t looked at anything specifically in regards to that to see if we have the legal authority.

Thursday was the first day of Gov. Brian Kemp’s statewide bus tour. Kemp was originally scheduled to start the tour Wednesday, but canceled the kickoff when tornadoes left serious damage in Bryan County and Kemp headed South instead.

Once on the trail in Dawsonville and Dahlonega, the governor gave his new stump speech full of items that recently passed the General Assembly. Topping that list were tax cuts, teacher pay raises, the gas-tax suspension, and other big-ticket items that Kemp’s challenger, David Perdue, has called “election year giveaways.”

The governor said the teacher pay raise and other items were the last of his original campaign promises, which he was fulfilling. More:

It’s time for our weekly round up of Georgia politics, which you can find every Friday over on the Politically Georgia podcast.

This week we’ve got the latest on the governor’s race, the race for U.S. Senate, reader questions and our weekly installment of “Who’s Up/ Who’s Down.”

Heads up: Gov. Brian Kemp will sign legislation that allows Georgians to carry handguns without a permit on Tuesday at Gable’s Sporting Goods in Douglasville. It’s something of a full circle for the governor, who announced he would support the measure at a gun range in Cobb County earlier this year.

The agriculture commissioner is visiting about a dozen towns far from metro Atlanta in the next few weeks as he tries to score a runoff against Herschel Walker by keeping him under the majority-vote mark. 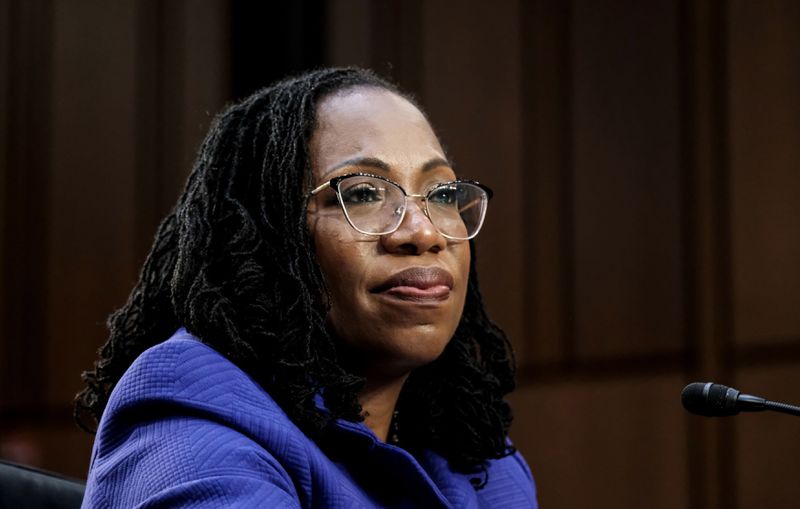 It’s official. Judge Ketanji Brown Jackson is the next Supreme Court justice, making her the first Black woman in history to serve in this position.

Members of the Congressional Black Caucus rejoined at the historic nature of the vote. Georgia Reps. Hank Johnson and Lucy McBath were among the members who walked over to the Senate side to sit in the gallery and witness the vote in person.

McBath teared up afterwards as she reflected on the work of civil rights activists like her parents and Thurgood Marshall, the first Black Supreme Court justice, to pave the way for Jackson.

“I’m overjoyed and overwhelmed,” she said.

Meanwhile Georgia Sens. Jon Ossoff and Raphael Warnock received another round of praise for winning their 2021 runoffs and helping flip control of the Senate. That gave President Joe Biden an easier path to make good on his campaign promise to nominate a Black woman to the high court.

Warnock said as much during his floor speech prior to the vote.

“The people of Georgia made this appointment possible by making history last year,” he said. “So in addition to thanking Georgia for this moment, I want to acknowledge that the historic nature of her appointment isn’t lost on me.”

A new round of sanctions against Russia passed easily through Congress on lawmakers’ last day before a two-week recess.

The vote in both chambers was overwhelmingly in favor of two separate measures. One eliminates Russia and Belarus’ favorable trade status with the U.S.; the other bans the import of Russian oil or fuel. The measures are intended to punish Russia for its ongoing invasion of Ukraine.

That made the handful of dissenters all the more glaring. Two progressive Democrats joined with seven Republicans in opposing the energy ban.

Georgia Rep. Marjorie Taylor Greene was among the three far-right conservatives members who voted “no” on both, joining Florida Rep. Matt Gaetz and Kentucky’s Thomas Massie. Greene also opposed a similar bill last month that passed in the House but stalled in the Senate until the more recent compromise was reached.

Thursday’s vote brought a new round of criticism that she was soft on Russia despite growing evidence of human rights violations in Ukraine.

Greene posted on Twitter why she remains opposed to additional sanctions against Russia.

“I’m voting No again today because I was right to vote No the 1st time,” she wrote. “We’re already seeing the consequences. High food costs, food shortages & the early stages of famine. Sanctions haven’t & won’t stop Putin. They will directly hurt Americans & hurt people across the world.”

Georgia will be well-represented as members of the House and Senate work together to iron out language on a bill intended to help America compete better against China when it comes to business, manufacturing, technology and innovation.

Sen. Raphael Warnock was selected to represent Senate Democrats on the conference committee. U.S. Rep. David Scott is among the slate of House Democrats. And U.S. Rep. Buddy Carter is among the House Republicans who were selected.

A major provision in versions of the bill passed by both the House and the Senate would provide $52 billion in government subsidies to help U.S. companies increase the production of semiconductors. That could help businesses like the Kia assembly plant in West Point avoid the shutdowns caused by lags in the supply chain for products made in China.

The League of Conservation Voters is out with a new ad praising U.S. Sen. Raphael Warnock for working to lower the cost of gasoline and move toward clean energy. The group says it is spending six figures to run the ad online and on broadcast channels statewide.

FILE – Georgia gubernatorial Democratic candidate Stacey Abrams talks to the media after qualifying for the 2022 election on Tuesday, March 8, 2022, in Atlanta. Abrams has become a millionaire. A disclosure filed in March shows the candidate for governor is worth $3.17 million, thanks mostly to book and speaking income. Abrams was worth $109,000 in 2018 when she first ran for governor. (AP Photo/Brynn Anderson, File)

FILE – Georgia gubernatorial Democratic candidate Stacey Abrams talks to the media after qualifying for the 2022 election on Tuesday, March 8, 2022, in Atlanta. Abrams has become a millionaire. A disclosure filed in March shows the candidate for governor is worth $3.17 million, thanks mostly to book and speaking income. Abrams was worth $109,000 in 2018 when she first ran for governor. (AP Photo/Brynn Anderson, File)

The New York Times reported that Stacey Abrams was an honoree, along with Iman, at the “15 Percent Pledge Gala,” a glittering, celebrity packed event in New York that the Times called the “Black Met gala.”

But before Republicans hammer Abrams for being in New York to hobnob with Hollywood types, they should know that Abrams did not attend, and sent a video of thanks instead.

Since it’s Friday, we always like to send you into the weekend with some light reading. This week, we’ve got:

· Wednesday’s Political Insider column after the gavel fell on the last day of the legislative session, “What happened to the Clarence Thomas statue, the rabies bill, and other Capitol ideas?”

As always, Jolt readers are some of our favorite tipsters. Send your best scoop, gossip and insider info to patricia.murphy@ajc.com, tia.mitchell@ajc.com and greg.bluestein@ajc.com.

Sign Up to receive the Morning Jolt & AJC Politics newsletters in your inbox.