Get breaking news updates and read about trending stories sent to you as a text message to your wireless device.

For the past six months, the Department of Corrections has managed to do what hundreds of prisons and jails in the nation have not: keep COVID-19 out of its facilities.

Another 128 inmates and detainees were tested Thursday and all tests were negative. Maj. Antone Aguon said this week, at DOC it’s so far, so good.

None of the tested inmates or detainees have yet had a positive result.

“The policies we implemented since March have been effective. As stringent as they are and as inconvenient as they are for inmates and families, they appear to be working,” Aguon said. “We’re confident we can ride this situation out, but we pray every day that we don’t get it.” 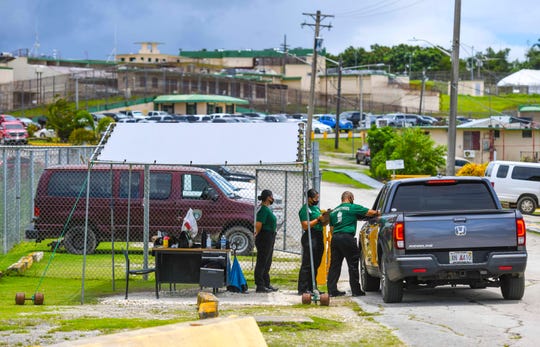 Aguon, correctional facility assistant superintendent and administrative services division chief, said as of Wednesday, there were 600 in DOC’s custody. It’s about the same compared to population reports before the public health emergency.

According to the CDC, there are 1,241 affected facilities in the nation. As of Oct. 1, there were 143,381 positive inmates or detainees, 30,625 positive staff and 1,106 deaths in correctional and detention facilities.

DOC since mid-March implemented mandatory face masks for staff, encouraged staff to stay home if they felt sick and stopped visits. Before shifts, staff get their temperature taken.

Without masks and a vaccine, we could reach Herd Immunity from COVID-19, but deaths would skyrocket. We break down the science of it.

Detainees and inmates were given masks as well. Aguon has previously said cleaning equipment is made available to inmates and detainees, though the department must regulate the finite supplies.

Four corrections officers in the past six months tested positive. They stayed home and isolated and all are back to work, Aguon said.

“We’re doing the best that we can,” Aguon said.

In the first two months of the year, DOC booked an average of 11 people a day. That dropped to an average of seven a day for March and remained low through September, according to DOC.

DOC logged how many people were booked and released each day and the averages for the pandemic months rounded out to about five or six for bookings. In July, the daily booking average was 8. Just as many people were released, on average.

The Judiciary of Guam in March suspended sentences for defendants serving weekend sentences.

It was one of several efforts put in place “to maintain social isolation and closures to deter the rapid increase in spread of COVID-19,” the administrative order stated.

These days, when a detainee is booked and confined, the men are kept in a separate area for at least 14 days, Aguon said.

“They’re checked by the medical staff twice a day,” he said. “They are issued a mask. We have COVID questionnaires as part of processing. If anyone has a fever, the medical staff will handle it in accordance with their protocol.”

New female detainees are also separated as much as possible. They undergo the same medical screening as the men and get a mask.

“As best we can, (we) separate them from the other inmates,” he said, adding the women’s area only has two units.

If an inmate or detainee were to test positive, Aguon said DOC has a medical team on site and they’d follow procedures.

“This is all new for us too. We’re keeping an eye on what they’re doing in the mainland and what’s … going on in the mainland,” he said. “We’re doing our best to keep it out.”

Aguon said the staff and the inmates should get a pat on the back for maintaining their COVID-free status.

“All these restrictions, it’s not to punish anybody and make anyone’s life more inconvenient than it is. It’s to protect the prisoners and the staff,” he said.